‌U.S. Under Secretary of Education Ted Mitchell visited Bunker Hill Community College on April 8. Under Secretary Mitchell sought students’ opinions about what works and doesn’t work in U.S. education, telling them, “I’m excited to be here and to hear your stories.” Mitchell, who was appointed on May 8, 2014, is charged with helping implement President Obama's goal: for the U.S. to have "the best educated, most competitive workforce in the world." Also joining the Under Secretary was newly sworn- in Chris Gabrieli, Chairman of the Massachusetts Board of Higher Education. This was Gabrieli's first campus visit in his new position and he expressed his gratitude to be included in the visit. 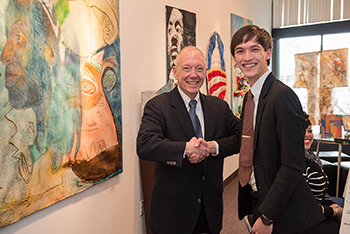 View photos from his visit.