U.S. Senator Elizabeth Warren will be the keynote speaker at Bunker Hill Community College’s 41st Commencement exercises on May 30, 2015. A long-time friend of the College, Warren has visited the campus to discuss issues such as consumer protection and veterans’ needs. 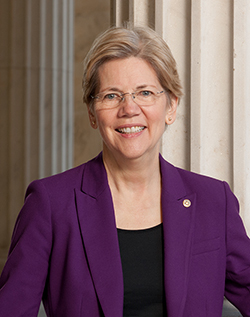 “We are honored to have Senator Warren as this year’s Commencement speaker,” said BHCC President Pam Eddinger. “She shares the concerns with social and economic mobility that are so essential to our students and to the mission of our College.”

The senior senator from Massachusetts is a former Harvard Law School professor and prominent legal scholar. She is known as a consumer protection advocate and spokesperson for the financial well-being of middle-class families. She has written more than a hundred articles and ten books, including three national best-sellers, A Fighting Chance, The Two-Income Trap, and All Your Worth.

The Boston Globe named Warren Bostonian of the Year, and Time Magazine has just named her one of the 100 most influential people in the world for the third time. The National Law Journal named her one of the Most Influential Lawyers of the Decade. Graduating classes at Harvard have twice recognized her with the Sacks-Freund Award for excellence in teaching. Warren is a graduate of the University of Houston and Rutgers School of Law.