Jared Standish, a BHCC student working as an intern at EMC Corporation in Hopkinton, Massachusetts, has won the national Two-Year Program Student Achievement Award from the Cooperative Education and Internship Association (CEIA). 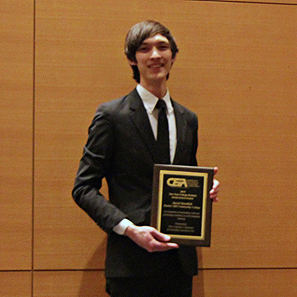 Standish received $500 and attended the CEIA National Conference in Atlanta, where he was part of a panel with students attending four-year colleges or earning their master’s degrees. His comments garnered praise from CEIA President Patricia Bazrod, who personally congratulated him on his strong presentation. “We are so proud of Jared,” said Sharon Schaff, BHCC Director of Career Advancement and Internships. “He is one of the most enterprising, industrious and goal-oriented students I have come across.”

“Jared’s selection for this honor is a testament to his quality of work, professionalism and dedication to both his internship and his academics,” said Collette Knightly, Director of Global Services Marketing Programs at EMC. EMC has recognized him with three quarterly Rewards and Recognition awards, typically given to full-time employees. While on the job, Standish was selected to design promotional materials distributed to more than 13,000 attendees of EMC World, an annual trade show.

“Without doubt, our College, through Jared Standish’s stellar representation, has distinguished itself as having a high-caliber internship program,” said Cora Miller, Learn and Earn Coordinator, who introduced Standish at the awards ceremony. The Learn and Earn program offers students paid work experience in top Greater Boston corporations. More than 330 students have now taken part in the program, gaining experience in an array of industries, from healthcare and financial services to the defense and pharmaceutical industries.

The Cooperative Education and Internship Association has been the leader in work-integrated learning practices for more than 50 years. More than 1,600 colleges and universities are members.