Author and cartoonist Josh Neufeld captivated the Bunker Hill Community College audience of students, faculty, staff and visitors with his tale of writing the bestselling graphic novel A.D.: New Orleans After the Deluge. Neufeld spent three weeks as a Red Cross volunteer in Mississippi following Hurricane Katrina, the devastating 2005 storm that killed more than 1,800 people and caused over $100 billion in property damage. 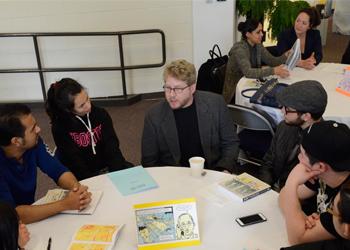 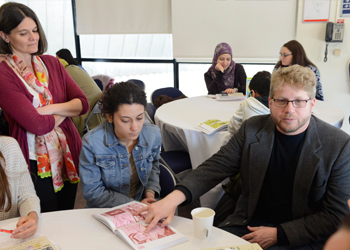 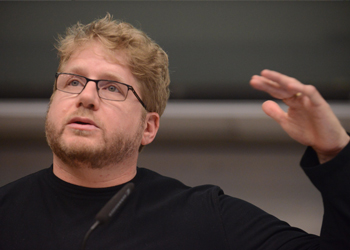 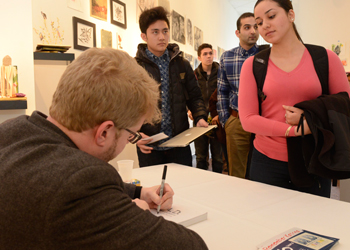 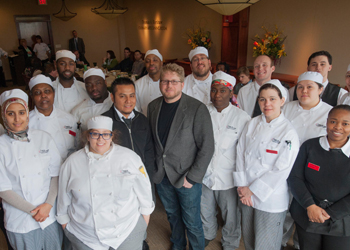 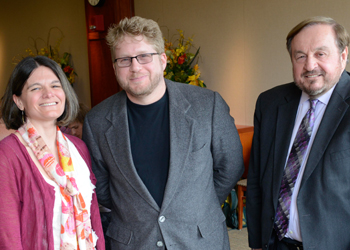 Neufeld said he wanted to tell the story of Katrina through the eyes of people who had lived through the storm, including the well-off and poor, black and white, young and old, gay and straight, male and female. He wanted to document key experiences including the decision to evacuate, the ways people faced the flooding of their homes, how they dealt with being at the Superdome or Convention Center, what they felt at the loss of precious possessions, and more.  After much research, he settled on seven survivors. The book interweaves their experiences through key moments of the disaster, using cartoon drawings and dialogue drawn from extensive interviews.

“It means a lot that 10 years down the road, students like you are paying attention to the issues raised by Hurricane Katrina,” he said, pointing out that Katrina, with its 140-mile-an-hour winds, was not so much as natural disaster as a “civic disaster.”

Neufeld creates journalistic nonfiction comics and graphic narratives of political and social upheaval. His illustrations have appeared in the New York Times, the Washington Post and the Wall Street Journal. His books have been translated into French, Italian, Dutch and Korean.

Neufeld spoke as part of the One Book program, which brings the entire College community together to read a single book over the course of an academic year. The reading of A.D. was supplemented by a poetry and graphic narrative contest, a multi-cultural fair with a Mardi Gras theme, a jazzfest, a screening of the film “Surviving Katrina,” and numerous classroom activities.

Program Overview: The One Book program engages our college community in dialogue on a range of issues. The program invites analysis, promotes critical thinking, and encourages positive change. Students, faculty and staff have the shared experience of reading a text and examining its effects upon our community. Aligned with the college’s mission, vision statement and institutional values, the One Book program fosters the very competencies and experiences we strive to provide for our student body and college community, particularly, “creating pathways and partnerships to promote student services” and “demonstrating strength through diversity.” The One Book project promotes literacy in an innovative way and creates interest within a subject that students may be encouraged to pursue and advocate for in the future.