In what is likely his final visit to Bunker Hill Community College (BHCC) as Governor of Massachusetts, Deval Patrick this morning described the state’s ongoing commitment to education in Massachusetts. “Education is the single most important work we have before us,” he told a gathering of BHCC faculty, staff, students and friends of the College. Accompanying the Governor were key members of his administration, including Secretary of Education Matthew Malone, Commissioner of Higher Education Richard Freeland and Chair of the Massachusetts Board of Higher Education Charles Desmond. 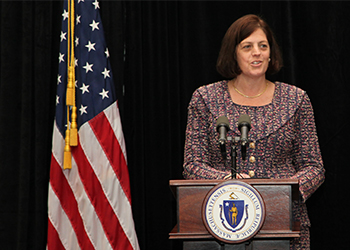 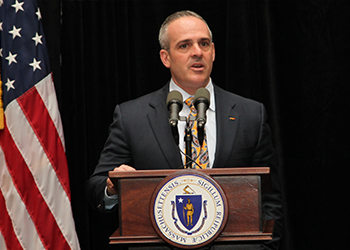 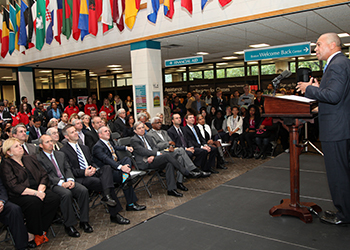 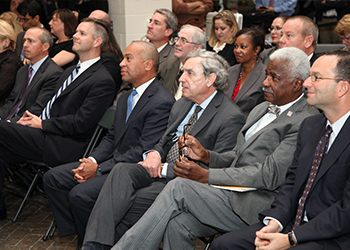 “We rank Number One in the nation in student achievement,” the Governor said, citing statistics reflecting progress made in the last eight years while noting that much remains to be done.  He urged reformers to avoid both “nostalgia” and the “I know better syndrome” as they look to the future of education in the state. The danger of nostalgia, he said, is that “things have changed” in recent times, and the “I know better syndrome” suggests easy answers to complex problems.

Amy Young, secretary for the Bunker Hill Community College Board of Trustees, greeted the Governor in lieu of BHCC President Pam Eddinger, who was attending a trustees conference with BHCC Board Chair Marita Rivero in Chicago. Young pointed to BHCC’s recent honor in being invited for the third time in the last year to the White House as one of the 50 leader colleges in community college reform.

Secretary of Education Matthew Malone introduced the JROTC Color Guard from Madison Park Technical Vocational High School, who presented the colors for the Pledge of Allegiance. Malone thanked the Governor for his leadership, praised the state’s teachers as “the best in the nation” and introduced Darlene White-Dottin and her first grade students from Orchard Gardens K-8 Pilot School in Roxbury, who performed a series of poems to enthusiastic applause from the audience.