Television, film and stage actor Giancarlo Esposito launched Bunker Hill Community College’s annual Compelling Conversations speaker series on October 16, delivering a dynamic, comprehensive and interactive talk to an enthusiastic audience. Before his talk, Esposito enjoyed a lunch prepared by Culinary Arts students and interacted with students at two Learning Community Seminars, “Telling our Stories” and “Do the Right Thing.” After he spoke, he answered questions from students in the audience, and signed autographs in the Mary L. Fifield Art Gallery. 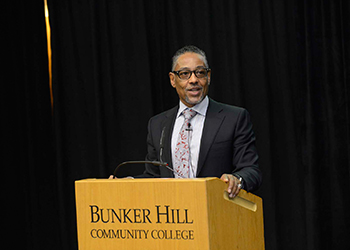 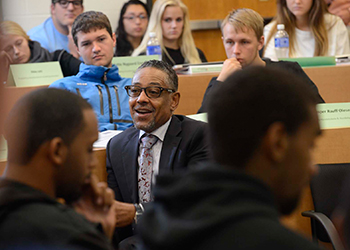 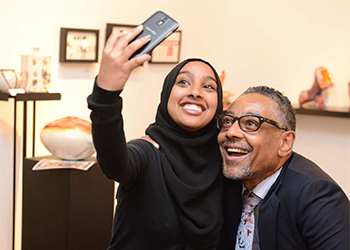 Esposito discussed the challenges his bi-racial Italian and African-American heritage presented as an actor, his choice to stop playing “hoods and crooks” at a certain point in his career, and his firm belief in the practice of positive thinking. He exhorted students to “figure out what you have to offer, give, and share.”

The actor said he transcended racial stereotyping in his profession by “changing my thinking, dedicating myself to the material, and ‘acting as if.’” When he faced disappointment, he turned to poetry and jazz to lift his spirits. He told the audience he was born in Copenhagen, Denmark, and received his degree in television and radio from Elizabeth Seton College in New York.

Esposito is known for his current portrayal of Tom Neville on NBC’s Revolution, and from his iconic role as Gustavo “Gus” Fring in AMC’s series Breaking Bad, for which he earned a Critics Choice Award and an Emmy nomination. He has acted in more than 60 films, including Do the Right Thing, Ali and The Usual Suspects. Esposito is a board member of Creative Coalition, an arts and advocacy group that champions the First Amendment.