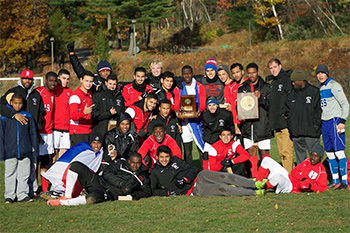 The recent success of the BHCC men’s soccer team has helped to strengthen its local reputation, according to Head Coach Scott Benjamin. Building upon that reputation the 2014 coaching staff recruited its largest incoming class in the College’s history. Although the team suffered three losses in its first three non-league matches of the season against the top-ranked teams of Herkimer, Suffolk and Nassau, the slow start did not deter the team from its quest for the regional championship. Led by the play of key freshmen and six returning players from last year’s championship team, the team brushed off its initial losses and posted a conference record of 9-1. The team tied or topped all Division I teams in region 21, which includes all of New England.

The BHCC men’s soccer program has sought to develop a team culture focused on a strong work ethic and a positive mental approach to the game of soccer, academics and life in general, said Benjamin. Since joining the NJCAA in 2003, more than 200 players from BHCC have moved on to Division I, Division II and Division III programs around the country. The BHCC men’s soccer program has progressed toward regional dominance, and is currently placed among the top-ranked teams nationally.