U.S. Senator Edward J. Markey will be the commencement speaker at Bunker Hill Community College’s 40th Commencement exercises on May 31, 2014. 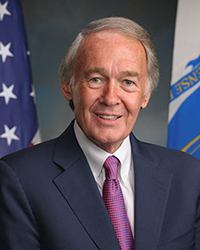 Markey is currently a member of the U.S. Senate Committee on Foreign Relations, where he serves as Chairman of the Subcommittee on International Development and Foreign Assistance, Economic Affairs, International Environmental Protection, and Peace Corps. In addition, Markey serves on the U.S. Senate Committees on the Environment and Public Works Committee; Commerce, Science and Transportation; and Small Business and Entrepreneurship. In recognition of his national leadership on environmental issues, Markey was named Chair of the Senate Climate Change Clearinghouse.

Markey was born in Malden, Massachusetts. Like many BHCC students, he was the first in his family to go to college. He earned a B.A. from Boston College and a J.D. from Boston College Law School. Upon graduation from law school, he worked as a lawyer in private practice. Markey was a member of the U.S. Army Reserve.