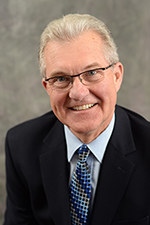 Pitcher has more than 25 years of experience in higher education administration. Before joining BHCC, Pitcher served as vice president for finance and administrative services for nine years at Cumberland County College in Vineland, New Jersey. Previously, he served as senior vice president and chief financial officer for 18 years at Southwestern Michigan College in Dowagiac, Michigan.

Pitcher is a Certified Public Accountant, licensed through the state of Indiana. He holds a Master of Business Administration degree from Georgian Court University and a Bachelor of Science degree in accounting from Indiana University. Pitcher is a pursuing a Doctor of Management degree in community college leadership from the University of Maryland.