Building upon the Patrick Administration’s commitment to help strengthen the Commonwealth’s community colleges’ workforce development programs, Secretary of Administration and Finance Glen Shor recently recognized graduates of the joint certificate and internship program developed by Bunker Hill Community College and the Department of Revenue (DOR) to educate students who have chosen a career in taxation or auditing. The certificate program was launched last fall. Students who successfully completed the prerequisite courses were then accepted into a paid internship program at DOR which included rotations in auditing and taxpayer services. 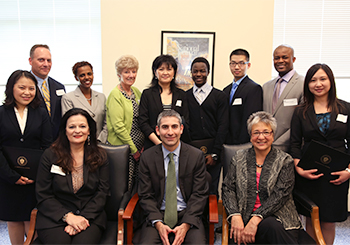 Bunker Hill Community College, in partnership with DOR, began offering the new taxation certificate program in the spring of 2013.  As part of the new curriculum, students participated in presentations from DOR staff on Massachusetts state tax law. Upon completion of the class curriculum, students enrolled in the certificate program who met certain GPA requirements, also participated in a 17-week internship at DOR.   In addition to the rigorous certificate program, Bunker Hill and DOR collaborated on the Business Administration Associate Degree with a Taxation Option that was added to the curriculum this spring.

“The students just finished up their internships at DOR, where they spent several months working in auditing and taxpayer services,” said DOR Commissioner Amy Pitter.  “This is an extraordinary opportunity for us to work with the students and really get to know one another.  We have openings here at DOR and this group of interns is exactly who we are hoping to attract.”

“We are so pleased with the success of this new partnership with the Department of Revenue, which has given our students not only internship opportunities but job offers. It's a win-win for our students and the program," said Pam Eddinger, President of Bunker Hill Community College.

Commissioner Pitter also noted that the program at Bunker Hill Community College has helped DOR to identify and attract students looking to change careers and acquire mid-level skills for a professional career in taxation. DOR reached out to Bunker Hill Community College to help create the program in the face of a critical shortage of workers. The department anticipates losing a considerable number of longtime, skilled employees over the next five years due to retirement or new opportunities.

In total, nine students completed the taxation certificate and internship programs.  Some of the students who successfully completed the program may be offered positions at DOR.