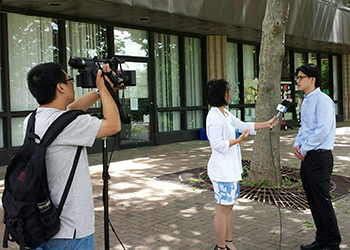 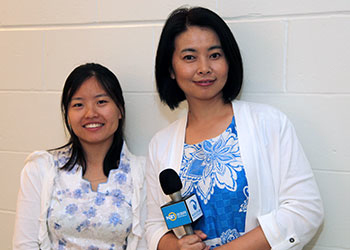 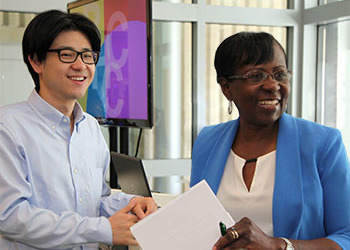 The team from Zhuhai Radio and Television taped interviews with three BHCC international students who are from China: Luoyan Zhang, a computer science major, Zhuo Jun Wang, who graduated in May with a concentration in education, and Siling Luo, who is studying American history.

Zhang, who is from Shanxi, came to the U.S. in April 2013 having studied English in China. He plans to transfer to Boston University after he completes his degree at BHCC. Impressed by the caliber of instruction at the College, Zhang commented, “My first teacher at BHCC was a Harvard professor.”

Wang, who discovered BHCC online while in China, arrived in 2008 from Sichuan with her husband so he could pursue his Ph.D. in physics from Boston College. Wang and said her experience at BHCC has “really opened my eyes to the world.”

Luo was drawn here by her passion for American politics. A journalist with a Ph.D. in Chinese literature, Luo published a book, The Boston Love Letter, about her experiences in Boston. The book is based on columns she has written as a BHCC student. It was published by Zhejiang University Press last summer. “Bunker Hill has given me lots of inspiration,” said Luo.