Executive Director of the Museum of African American History Beverly A. Morgan-Welch is this year’s recipient of the President’s Distinguished Service Award from Bunker Hill Community College. The award recognizes extraordinary commitment and service to the College. It is the highest honor the College bestows on a civic leader. 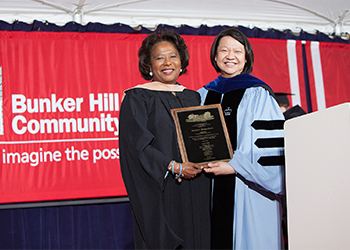 “The Museum of African American History houses the artifacts as well as the spirit and ideals that fuel democracy and the American dream,” said BHCC President Pam Y. Eddinger in making the award at the College’s 2014 Commencement exercises. “It was our students’ good fortune that Beverly Morgan-Welch’s clear vision extended to the world of higher education.”

The Museum and the College have developed a dynamic reciprocal partnership that has provided BHCC students with community-based, culturally relevant learning experiences that deepen scholarship and foster success. The College’s Learning Communities incorporate Museum exhibits and resources as well as visits to the Black Heritage Trail® to help students understand the history of Boston’s vibrant African American community and the struggle to realize full equality.

Under Beverly Morgan-Welch’s leadership, the Museum, with locations in Boston and Nantucket, represents a crucial cultural resource for Boston and a vital part of the nation’s history. In addition to her work with the Museum, Morgan-Welch has worked in nonprofit management and corporate philanthropy for three decades. She is a graduate of Smith College and a recipient of the Smith College Medal.