The Academy Award-winning actress, author and activist Marlee Matlin addressed a packed audience at Bunker Hill Community College yesterday. Using American Sign Language and an interpreter, she described the frightening loss of her hearing at 18 months, her parents’ decision to raise her at home, her determination to become an actor, her battles with addiction as a successful young star, and the challenges of being an advocate for the deaf community. 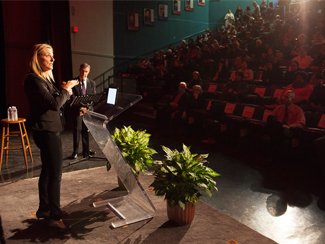 Best known for her starring role in Children of a Lesser God, Matlin's ambitions were realized as she became the youngest person ever to receive the Academy Award for Best Actress, and is one of only four actresses to receive this honor for her first film. Her numerous television appearances include roles on The West Wing, The L Word, and Reasonable Doubts. She currently acts in ABC Family’s Switched at Birth.

Matlin said that her early deafness made her feel she was “living in a fog.”  At the age of five, she learned sign language, and the fog lifted. “My world changed overnight,” she said. Stressing the importance of language to the college audience, she said, “Language is the earth from which the mind of a child grows.”

Responding to the frequent assertion that deafness cuts a person off from the world, she said “only if you let it. Otherwise, how could we have deaf doctors and lawyers—and even Oscar winners? The real handicap of deafness lies not in the ear but in the mind,” she said. At the conclusion of her presentation she taught the audience how to sign the phrase “Courage plus dreams equals success.”