With shouts of welcome and hugs all around, faculty and staff gathered at the College on August 28, 2014, for the traditional Convocation celebration that launches every academic year. The event began with a lively “farmers market breakfast” of locally-sourced and sustainable fresh foods from small Massachusetts businesses and farms, sponsored by the Sustainability and Entrepreneurship Clubs and the BHCC Community Center for Entrepreneurship. 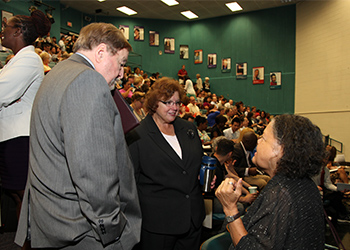 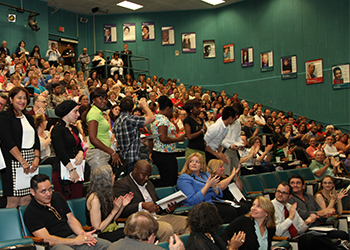 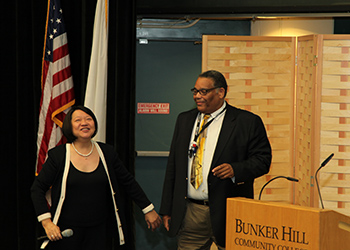 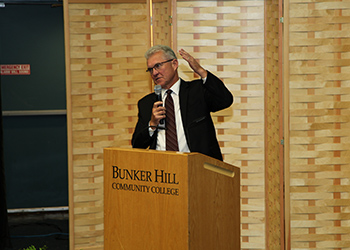 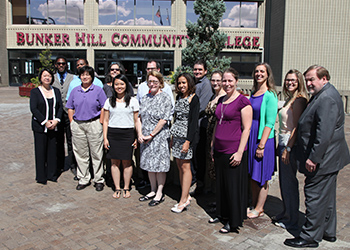 President Pam Eddinger welcomed the enthusiastic gathering.  Marita Rivero, Chair of the College Board of Trustees, brought greetings from the Board and thanked the faculty and staff for continuing to offer students the encouragement and support they need to succeed. Richard Boulware, Chair of the Legal Studies and Public Safety Department, also greeted the gathering, and described the role of the College forum, which he moderates.  Lateia Johnson, President of the Student Government Association, recalled for the audience her own “terrifying but exciting” first day at college, and lauded College programs such as Learn and Earn helped her find her way.

President Eddinger then took the floor.  She called out a dozen members of the audience to offer them special thanks for their contributions, and then described and explained the reorganization plan that she has put in place with input from numerous faculty and staff members over the past year.

Lunch followed in the gym, with an opportunity for faculty and staff to reconnect with former colleagues and get to know new ones.  Department and Division meetings came next. Meanwhile, in the Main Lobby, students eagerly signed up for courses, as registration continued down to the line in preparation for first day of another academic year.  Classes begin on Tuesday, September 2, 2014, as BHCC begins its 41st year of serving the educational needs of more than 14,000 students in the Greater Boston area and beyond.