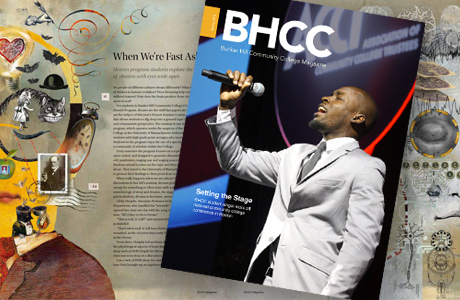 The College took top honors in NCMPR’s regional competition last year as well, and has garnered numerous awards in the organization’s national competitions. This year’s awards were announced October 21 during the NCMPR regional annual conference in Mystic, Connecticut, after judges from across the country evaluated entries in 40 categories.

This year, a Gold Award went to the spring and summer 2013 issues of BHCC Magazine. A magazine illustration, which highlighted an honors program dealing with the subject of dreams, also won a Gold Award for digital illustration. BHCC won additional Gold Awards in the areas of transit advertising and marketing campaigns.

Silver Awards went to the College’s website and course schedule. The College won Bronze Awards in the categories of academic catalog and booklet. Additionally, the College earned a Silver Award in the wildcard category for a set of murals defining an office suite for a major new program.  To view communications awards the College has received since 1999, visit www.bhcc.mass.edu/imc/awards.