Shoshana Johnson, the first black female prisoner of war in U.S. military history, believes that females should be allowed into combat roles in the U.S. military, saying women already confront the challenges of war. 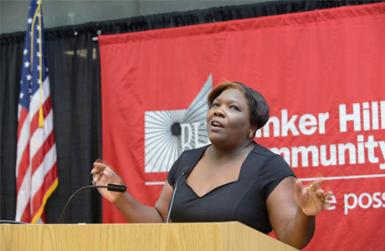 Speaking at Bunker Hill Community College on November 7, Johnson, an Army cook, described her experience when she and members of the 507th Maintenance Company were attacked and captured in the city of Nasiriyah on March 23, 2003, during Operation Iraqi Freedom. Johnson suffered severe leg wounds in the attack. Her unit was rescued after 22 days by U.S. Marines.

“Whether you want to acknowledge it or not, women are already in active combat,” said Johnson, who has received a Bronze Star, Purple Heart and Good Conduct Medal as well as a U.S. Army Service Ribbon, Army Commendation Ribbon and National Defense Ribbon. “I was shot and captured – as a cook. So what are you protecting me from by keeping me from gunnery and artillery training? It doesn’t make any sense.”

Johnson visited BHCC as part of the College’s recognition of Veterans Day. She toured the BHCC Veterans Center, spoke with veterans and students and gave a campus-wide address on her experiences in captivity and during her recovery.

She urged fellow veterans to seek support for post-traumatic shock and other issues. “You don’t have to carry the load by yourself; you have support from your fellow veterans,” she said. “We shared the burden in combat; we can share the burden now.”

Johnson’s visit to BHCC was co-sponsored by the BHCC Veterans Center and the BHCC Office of Diversity and Inclusion.