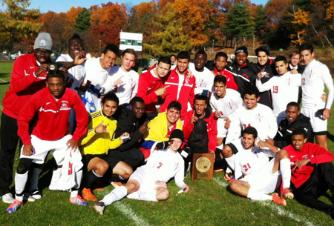 The Bulldogs now enters the first round in the Division III National Championships as the fourth seed, taking on Richland College of Texas at 1:30 p.m. on Thursday, Nov. 14, at host Herkimer Community College in New York. The final championship game will be played on Sunday, Nov. 17.

Like BHCC itself, the soccer team is a diverse group; players hail from Sweden, Morocco, the United Arab Emirates and Nigeria, as well as from Boston, Chelsea and Everett. Other players have families from Honduras, Brazil, Panama, El Salvador and Colombia.