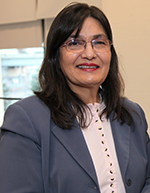 “Dr. Alice Murillo’s background and experience in higher education will make her a very successful Associate Provost at the Chelsea Campus. I look forward to working with her as
she develops more educational programs and services designed with and for the Chelsea community,” said James F. Canniff, BHCC Provost and Vice President of Academic and Student Affairs.

Murillo’s work in higher education has been honored with a research fellowship from the Association of Institutional Research and the National Science Foundation as well as the
MESA Administrator Award from the University of California, Office of the President, among other accolades.