Bunker Hill Community College (BHCC) was awarded $25.7M from the Baker-Polito Administration’s to fund a major renovation project at the College’s Charlestown Campus. 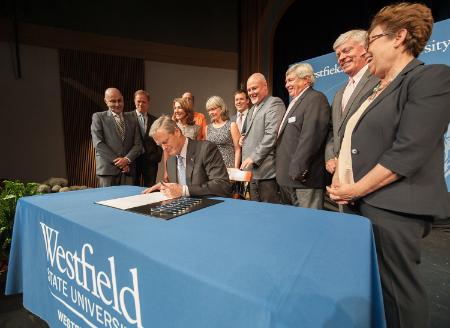 The announcement was made on July 10, 2018, on the Westfield State University campus at a ceremonial bill-signing of H.4549, An Act providing for capital facility repairs and improvements for the Commonwealth, authorizing approximately $3.9 billion to address the Commonwealth’s statewide capital needs, including higher education campuses, health and human services facilities, state office buildings, public safety facilities and courts. The bond bill authorizes $950 million overall for public education investments.

“This funding will transform BHCC’s Charlestown Campus,” says BHCC’s President Pam Eddinger. “We are grateful to the Administration for authorizing this bill that will enhance the college experience for our students by providing the supports and spaces that community college students need to complete their programs and enter the workforce successfully.”

Renovations at the College’s Charlestown Campus are one of six new projects in the Administration’s capital plan for higher education. The $25.7 million grant will allow BHCC to modernize its campus by converting existing, underutilized space to create new space for the College’s growing student population.

The largest community college in Massachusetts, BHCC serves 19,000 students annually. The main campus, a contiguous structure of approximately 450,000 square feet, has not been significantly renovated since it was built in 1973 for a student population of 4,000–less than one quarter the number of students currently served.

By re-imagining,  the College’s E-building atrium, an expansive, open-air space that spans four levels, the renovations will provide easy access and visibility for critical academic and student support services, while reclaiming significant square footage and repurposing existing space. Plans include the construction of a new Academic Success Center to expand and co-locate space for key services such as the College’s International Center; Veteran’s Center; LifeMap, an academic planning and career center; and Single Stop office, which links students with government benefits and services.

The project will also improve student success and retention, addressing critical student needs by expanding the College’s Library and Learning Commons to include integrated spaces for studying and collaboration, centralizing the College’s tutoring services and providing a welcoming social space for students to better connect with their classmates. Additionally, the renovations will include a new culinary innovation classroom to support students entering this growing field and will address deferred maintenance issues across the campus.

Read the full press release from the Governor’s office