Shirley Lacks and David “Sonny” Lacks, active representatives of their family’s story, captivated BHCC students, faculty, staff and visitors on April 27, 2017, with the story of their matriarch’s contribution to modern medicine–made without her knowledge or consent, as author Rebecca Skloot portrays in The Immortal Life of Henrietta Lacks. The Lacks family spoke as part of the One Book program, which brings the entire College community together to read the same book over the course of an academic year. 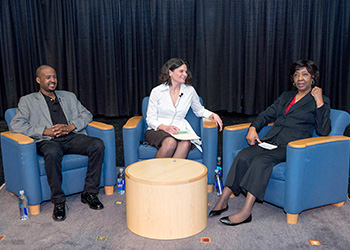 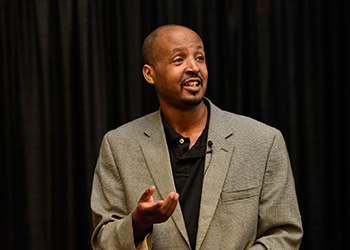 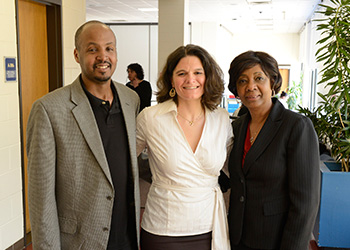 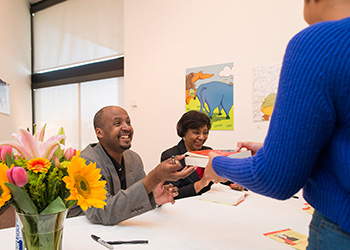 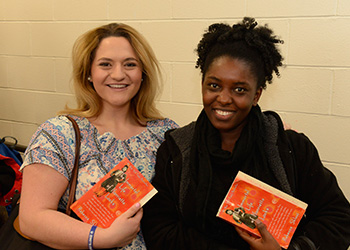 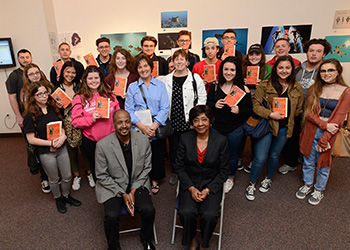 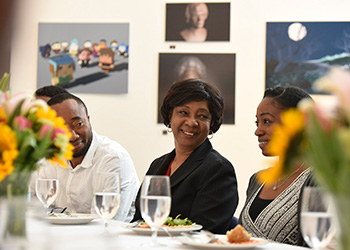 A New York Times bestselling novel, The Immortal Life of Henrietta Lacks, has sold 2.5 million copies and has received numerous awards and recognitions, including the National Academy of Sciences, National Academy of Engineering, and Institute of Medicine’s 2011 Communication Award for Best Book. It has been selected as a common read by over 250 schools, libraries and community institutions. BHCC joins over 100 communities and campuses who have been privileged to host the Lacks family.

“The Lacks family’s message continues to be one of hope, as they have transformed a victimized past into a proud future,” said Professor Jennifer Cohn, who coordinates the One Book program at BHCC. “They choose to focus on the positive impact of Henrietta’s scientific contribution to the world and want to raise awareness and promote positive action to solving the problems in our communities.”

The Immortal Life of Henrietta Lacks chronicles the story of a rural tobacco farmer and mother of five, Henrietta Lacks, who in 1951 was admitted to John Hopkins Hospital where she was diagnosed with cervical cancer. Henrietta died later that year.

Without her permission or the permission of her family, Lack’s cells were taken and used for scientific research. These cells, known widely as “HeLa” cells, have been vital in the development of the polio vaccine, gene mapping, cloning, in vitro fertilization and more. Despite the vast contributions to the medical field, and despite the amount of money that has been made by others through the sale of “HeLa cells,” Lacks and her family are relatively unknown and uncompensated; in fact, the family didn’t learn of the cells until 20 years after Lack’s death, when scientists began using her children in research without consent.

“The Lacks put a personal face to issues such as the dark history of medical experimentation of African-Americans, the birth of bioethics and the legal battles over informed consent,” said Bunker Hill Community College President Pam Eddinger. “Despite what the Lacks family has endured, they are proud to honor the memory of Henrietta and her unparalleled contributions to science.”

The One Book program engages the college community in a dialogue about a common text that addresses a current issue. One Book selections are meant to invite analysis, promote critical thinking and encourage positive change. Over 1,800 copies of the book were distributed to students, faculty and staff across campus at the start of the academic year. Eighty-five classes incorporated the book into their curriculum.

Prior to the afternoon presentation, the Lacks family enjoyed lunch with students and faculty in the Mary L. Fifield Art Gallery, and participated in roundtable discussions with students from two courses: Biomedical Engineering II and Learning Communities seminar: Health, Career, What’s Right for Me?”

At the presentation, Professor Cohn presented questions that were developed by student classroom discussions to the Lacks family. “Part of the justice is that we now know who the ‘HeLa’ cells belong to,” said Sheryl Lacks, daughter-in-law of Henrietta, when asked about the impact of Henrietta’s legacy, and the book on society. “She is no longer an unknown person, or simply an African American person.”