House Speaker Robert A. DeLeo will be the keynote speaker at Bunker Hill Community College’s 43rd Commencement exercises, which will take place on May 20, 2017, on the Charlestown Campus. 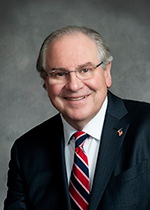 Since becoming Speaker in 2009, Speaker DeLeo has focused on giving residents of all skillsets a competitive edge through inventive education initiatives. He has been particularly focused on community colleges recognizing the critical role they play providing students with pathways toward job readiness and economic prosperity. Through the FY14 budget, the Massachusetts House of Representatives created the STEM Starter Academy, a program that complements and extends curriculum pathways to align with the workforce demands of employers in the STEM fields.

In addition to improving the economic lives of the state’s residents, Speaker DeLeo has focused on making the state a safer and healthier place. In 2014, Speaker DeLeo led the Legislature in passing a consensus-driven gun safety law that closes existing loopholes, creates a sustainable framework to stop gun trafficking and establishes best practices for school safety. Under his leadership, the House of Representatives has made strides in helping to combat the current substance addiction epidemic. The Legislatures has passed two medically comprehensive substance addiction bills and increased funding for this public health crisis to unprecedented levels.

Speaker DeLeo attended Boston Latin School, where he played on the baseball team, and went on to earn a B.A. from Northeastern University and a J.D. from Suffolk University Law School.

Speaker DeLeo was recently awarded the 2017 Legislative Achievement Award from The Massachusetts Association of Early Education and Care. In 2014 he received the Governor Walter R. Peterson Award for Leadership from the New England Board of Higher Education; and was selected as Legislator of the Year by Attorney General Martha Coakley, the Victim Witness Assistance Board and the Massachusetts Office for Victim Assistance.