Donna Akerley-Procopio, a professor in Bunker Hill Community College’s Computer Information Technology Department, has been recognized by Cisco Systems for her excellence in teaching and for her 15 years of dedicated service. 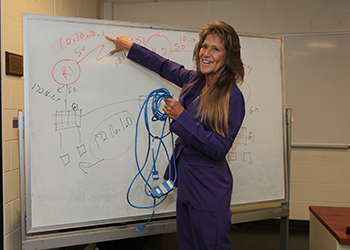 Akerley-Procopio was named number one Instructor/Cisco Certified Network Associate Security Specialist in the U.S./Canada Region. She earned the award for excellence in teaching, and received a pin and certificate commemorating her accomplishment along with a special listing on the Cisco NetSpace Recognition Program website.

Akerley-Procopio was also named an Instructor/Excellence Expert by Cisco for being among the top 10 percent of instructors globally. In addition, Akerley-Procopio received the 15 Years of Service Award for her long-term service to Cisco.

“The CIT Department, the Professional Studies division, and Bunker Hill Community College are fortunate to have Donna working on our behalf. We are grateful for her continued commitment to professional development,” said James F. Canniff, BHCC Provost and Vice President of Academic and Student Affairs.

On behalf of the Cisco Networking Academy Rewards and Recognition Program, Catherine Stanley, Program Manager of Corporate Affairs, thanked Akerley-Procopio for her “exceptional effort and contributions to her students’ success.”

Cisco’s Networking Academy Rewards and Recognition Program celebrates the accomplishments of community members who deliver outstanding results and make long-term investments in the vision of the Networking Academy program. With headquarters in San Jose, California, Cisco Systems, Inc., designs, manufactures and sells networking equipment. It is the largest networking company in the world.