Alpha Kappa Mu, Bunker Hill Community College’s chapter of Phi Theta Kappa Honor Society (PTK), won multiple awards at two recent PTK events. Alpha Kappa Mu was honored as one of three five-star Chapters in Massachusetts, one of only 10 five-star Chapters in the New England Region and one of the Top 100 Chapters nationwide. It received the Distinguished Chapter Award, winning second place overall in the region. In addition, AKM won its first-ever International Hallmark Award, and first place overall for its Honors in Action Project “Power of the Heart.” AKM also won first place in the “Ideas and Ideologies” category and received a Distinguished Honors in Action Project Award. 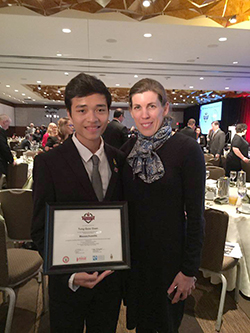 “These new honors are an awe-inspiring reflection of the high-caliber of our students,” said Paul Moda, Coordinator of Student Activities at BHCC and Advisor to Alpha Kappa Mu (AKM).

At PTK International, which took place April 7-9 in National Harbor, Maryland, AKM won in competition with than 1,200 chapters nationwide and scored in the top 50 in the country to win its first International Hallmark Award. Hallmark Awards are based on overall chapter performance, the completion of an Honors in Action Project and College Project, as well as performance by individual and executive board members.

AKM member Tori Joyce, a graphic design major, earned second place as a Distinguished Chapter Member. AKM members Lavell Wesley and Sondos Alnamos were singled out for honors in the 2016 Phi Theta Kappa Regional Arts Awards Competition. Wesley took home First Place in the Fine Arts Competition for his picture "Hidden" and Sondos Alnamos, who serves as Student Trustee on BHCC’s Board of Trustees, won Third Place in the Fine Arts Competition for her drawing "Vision by Heart." Wesley is part of BHCC’s Engineering Transfer Program.

AKM is BHCC's chapter of the Phi Theta Kappa Honor Society. Membership qualifies students for transfer scholarships at colleges and universities throughout the country. Headquartered in Jackson, Mississippi, PTK is the largest honor society in higher education with 1,285 chapters on college campuses in all 50 of the United States, U.S. territorial possessions and eight sovereign nations. More than three million students have been inducted since its founding in 1918, with approximately 134,000 students inducted annually.