As a social scientist and artist who works primarily in collage and multimedia, Chandler uses art to inspire, stimulate and promote thinking concerning unity and peace-building from the local to the global.

The residency is designed as a way for students to have meaningful interactions with art and practicing artists, and art's role in the College’s commitment to equity
and preparing students to be agents of social change.

Co-sponsored by the President’s Office and the Center for Equity and Cultural Wealth, the inaugural residency includes Chandler’s fall exhibition, an interdisciplinary multimedia exhibition of her visual art, poetry and scholarship; and in the spring, the continuing exhibition and a series of community conversations and artist talks inspired by the works on view.

I am a person of mixed heritage and have been a practicing artist-scholar, educator, and consultant for 40 years in the U.S. and abroad. Since the late 1980’s my work has focused on social and spiritual commentary-themes of peace, freedom, and using art to inspire, stimulate and promote thinking concerning unity and peace-building from the local to the global. 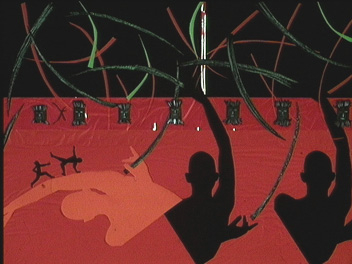 Crossing disciplines, I combine work as a social scientist and artist in lecturing and published works on how art worlds function and dysfunction globally.

For the last decade I have experimented with multimedia applications and digital technology to explore studio production and 2 and 3-D projects. As a collage artist, I use sketches, hand cut ‘drawings’, photographs, digitized images, and handmade papers to construct traditional and digital collage works, some large scale. My technique- “drawing with scissors” -uses scissors to cut preliminary sketches freehand, rather than with pencil. I have produced several “series” (7 or 9 works in each series) such as- The Seven Valleys, a meditation on spiritual journeying produced in France at La Muse Artist residency in 2009, the Peace Series, a set of nine collages that demonstrated humanity’s evolution in the stages of peace and war, or the Stone Tablets series (2014). The reconstruction of original “handmade” works and digitally generated images allows for a discovery of new means for expressing color, form, texture, and media and to explore socially relevant ideas. Examples are “Rapid Response” (2001-U-Mass, Amherst), a group exhibition on post “9-11” to a return to ‘series collages’ in “Stone Tablet Series #2-Kenya”(2008, above). My themes cover broad global issues of peace making, the meaning of freedom, and transcultural heritage and identity.

In 2010, my work -“Capoeira”- became the book cover of Women, War, and Violence: Personal Perspectives and Global Activism (Palgrave), a book I also co-edited. Frequently Chandler’s visual works also have accompanying poems to expand the social commentary impact and to highlight issues of identity and include her poem “Siouxjewgermanscotblack (cherokee)” (Other Tongues: Mixed Race Women Speak Out, Inanna Publications, Inc. 2010).

Robin M. Chandler, Ph. D holds an extensive publication and exhibition record (100+) since 1978 with a focus on social movements, arts and culture leadership, gender equality, post and neo-colonial studies, arts and culture, and race and cultural competency in nations undergoing rapid social, political, and economic change. Primarily a collage and multimedia artist, Chandler has exhibited in the US and Puerto Rico and abroad and is represented in many corporate and international private collections. An early memoir The Beautiful Flight Toward the Light: Reflections of An Artist’s Life (Australian Journal of Baha’i Studies, 2000) documents her career as a professional artist integrating spiritual principles into her work.

Dr. Chandler has taught at the University of Witwatersrand (Johannesburg), Massachusetts Institute of Technology, Wellesley College, Tufts/Museum School, Simmons College, and was a tenured professor at Northeastern University. As a practicing artist she is affiliated with the U.S. State Department’s Art in Embassies Program. A social scientist and gender specialist, Chandler’s research in international development is focused on the inclusion of girls and women into leadership by overcoming the crisis of gender-based violence.

Globally-seasoned as an artist-in-residence in France, the U.S., and South Africa, her work as a multimedia visual artist is being featured in a solo exhibition in the fall of 2018 at Bunker Hill Community College and as a curator of “Revolutionary Moments II” in the spring of 2019 as part of her residency.