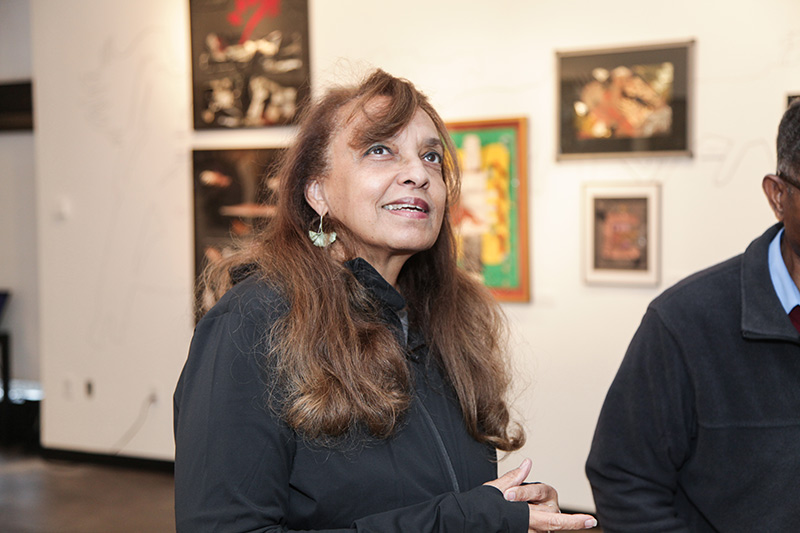 “Art is a process of cleansing, purifying.

Through it we make war on the weary demons

The weary demons who walk the soil of the heart and the spirit looking for a way out, whispering ‘Let us out….’

Artists are the way out, the journeymen.

Art is the long journey.”

Robin M. Chandler, Ph.D., has published and exhibited her work extensively since 1978, with a focus on social movements, arts and culture leadership, gender equality, post and neo-colonial studies, arts and culture, and race and cultural competency in nations undergoing rapid social, political and economic change. Primarily a collage and multimedia artist, Chandler has exhibited in the United Stated, Puerto Rico and abroad, and is represented in many corporate and international private collections. An early memoir—The Beautiful Flight Toward the Light: Reflections of An Artist’s Life—(“Australian Journal of Baha’i Studies, 2000)”— documents her career as a professional artist integrating spiritual principles into her work.

Chandler has taught at the University of Witwatersrand (Johannesburg), Massachusetts Institute of Technology, Wellesley College, Tufts/Museum School and Simmons College, and was a tenured professor at Northeastern University. As a practicing artist she is affiliated with the U.S. State Department’s Art in Embassies Program. A social scientist and gender specialist, Chandler’s research in international development is focused on the inclusion of girls and women into leadership by overcoming the crisis of gender-based violence.

Globally-seasoned as an artist-in-residence in France, the U.S., and South Africa, her work as a multimedia visual artist is being featured during a year-long residency and in a solo exhibition, Revolutionary Moments: Art, the Word and Social Action, Mary L. Fifield Art Gallery, Bunker Hill Community College (October 4, 2018, to June 19, 2019).

President Pam Eddinger, Ph.D. (PE): What stimulated the creation of this innovative inaugural residency at BHCC?

Robin Chandler, Ph.D. (RC): In the Spring term of 2018, I had been asked to do consulting for the College’s Center for Equity and Cultural Wealth, had participated in the exhibition Gathering, and had introduced faculty to my Colorquest model, a pedagogical tool that explores how race, ethnicity and representation is deployed in museums. A field trip to the MFA Boston was part of the Center’s agenda and faculty jumped in with both feet. The residency grew out of conversations that were already going on simultaneously at BHCC about diversity, inclusion and dialogue. Faculty and staff were also very clear about the value added in expanding the exposure and exchange with students on matters of arts and culture. I saw the workings of an institution that wanted to change to better serve its educational mission.  We talked about possibilities. From my perspective, the residency needed to address both of my professional career paths–the sciences and the arts—thus the choice of “artist—scholar.” I saw it as a spiritual journey with art and science feet. It was a pleasant shift from being an academic for 30 years at a private university.

PE: As a social scientist and artist did you have particular goals in mind for the residency?

RC: One of the strengths of the social sciences is observation. As a scientist, I was compelled by the student demographic—predominantly students of color from nearly 100 countries. A statistically dominant women of color dynamic—including you—was also an attractive space to work in considering the contrast with a faculty and administration that was mostly white and European.

I love a good adventure! I was hoping that the work in my exhibition Revolutionary Moments could become a catalyst for events, activities and creative collaboration with the campus community, as well as the College’s satellite campuses and the Greater Boston art world. As an artist, my vision was to launch the installation of the exhibition with the talented high school student apprentices from Boston Arts Academy and Artists for Humanity, and their Master Teacher Rob “Problak” Gibbs. The BHCC installation staffs were brilliant and generous. It was a real intergenerational experience and I was very flattered to be a part of it. And that was just the beginning! Soon we expanded the Residency exchange beyond the typical artist receptions to artist talks, dinner dialogues, community conversations and collaborations with visual and performing artists in the BHCC family. Lunching with the speakers in the College’s Compelling Conversations Series was a joy.

There have been many “sweet spots” in this residency: my interview with author Seng Ty (The Years of Zero: Coming of Age Under the Khmer Rouge) about the creative and cautionary resilience of surviving a brutal war in Cambodia; the classrooms and students I’ve visited and spoken to about both the works in the exhibition and sweeping current events; Poetry Month in April and more. It’s been an “embarrassment of riches”—truly enriching for all of us, I hope.

“The future of BHCC is brighter than ever. Learning leaders are being cultivated here.”

PE: You’ve referred to BHCC as a “next gen company.” How have you approached the design of a collaborative residency at a community college that connects with faculty, staff and students?

RC: We all talked about the central purpose of a typical artist residency—the production of a body of work for exhibition. My residency was the inaugural residency and I was moved that President Obama’s reference to the seminal work being done here in Boston was visionary. In the spring of 2018, I had presented on gender transformation issues at a dinner dialogue. I referred to BHCC, at that time, as a “next gen company”, meaning we build for the future. Our thinking and planning as administrators and faculty from older generations needs to be aspirational, that is, focused on the perspectives and experiences of younger generations. The assets of a cohort of students who are mostly young women of color are astounding. Many of them are polyglots, code switchers and they bring with them socially situated identities that reflect a unique way of thinking, talking, framing issues, valuing, interacting and feeling. Those assets should be harvested. College can be a minefield of expectations and many students have stressors in their lives. I like to use the Yoda approach with students—”With you, may the force be”—by directing them to the threshold of their own knowledge so that they can bring that energy and resilience to their professional learning tasks.

Building from a vision is hard work. So a small circle of people at BHCC became a kind of think tank. How could we maximize the presence of an artist scholar at the College?  I think we all wanted something more than a typical residency and there was a focus on more seasoned professionals, not merely someone who wanted to show their work, but someone who could share decades of experience with the BHCC community. I confess that I secretly used some of the strategies of sociological method to immerse myself in this new community. In most conversations, I recall that more and more, people desired a deeper relationship with the artist scholar. At many meetings, in online communications and in getting to know the BHCC community better, it was clear that we wanted to create something unique. With the support of your presidency, we have ended up with a model residency that has no comparison at any other community college in the U.S.

We built the model together from the ground up with novel opportunities for exchange with faculty, students and staff. This is the kind of “starfish” model of management thinking that brings everyone and their intelligences to the table to consult.

Building meaningful exchanges here has been a metamorphosis, too. We have modified the residency events to meet both the needs of the College and my needs. 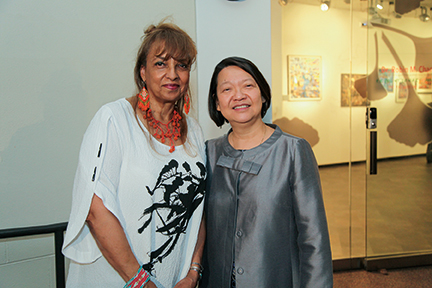 PE: What are the interdisciplinary links between the arts and the sciences that benefit community college students through the exhibition?

RC: A number of my works deal with a spectrum of themes. Sling Shot Around the Sun is about the creative exploration of science, unconventional problem-solving methods, and the spirit of change. The idea emerged from the original Star Trek series in an episode in which Captain Kirk got his crew into yet another impossible situation that required breaking the rules to innovate success. The Coltrane Series examines a trio of harmonic themes in music explored by musician innovator John Coltrane, and his concept of “sheets of sound,” his experimental improvisations with scale patterns and harmonic progressions, and his ability to incubate these concepts with Thelonius Monk and Miles Davis. Later, many suggested his preoccupation with “third relations” was a spiritual quest given his interest in Indian ragas. Whatever his inspiration, I could relate to the explorations in creative thinking that go on in the studio during the art production process and I thought this risk-taking was powerful.

Works from the Peace Series have asked us to set aside our preoccupation with centuries of war to re-examine the peace processes more closely and to try harder to break the cycles of aggression and the commercialization of war. Queens of the Baaskap–both the collage and the poem– investigate gender inequality within apartheid, asking us to rethink the reality of individual human nobility. I had worked in South Africa for 10 years, between 1993 and 2000, and was drawn to the paradoxes and the structural inequalities of that society, especially focused on women.

All of my curiosities and experiments ask questions across disciplines. They propose that we all rethink the artificial divisions, the disparities in our thinking about how to achieve social change based on new principles of equality and unity. This applies to interdisciplinary teaching, research, social organization, decision-making, and where we invest our time and money. Collaboration across boundaries of gender and race and across the unfortunate chasm between what is art and what is science needs to be reduced and replaced with new ways of seeing interdisciplinary thinking. I think it’s critical to demonstrate to students the importance of working across disciplines. Many of them are being prepared for career paths that require collaborative thinking across fields, teamwork, and learning how to respect one another across professions. We have an unfortunate professional caste system in modern societies and in higher education. It needs to be dismantled.  We need to relearn the equal power of each profession, the dignity and the learning curve inherent in all professional paths.

“Collaboration across boundaries of gender and race and across the unfortunate chasm between what is art and what is science needs to be reduced and replaced with new ways of seeing interdisciplinary thinking.”

PE: Beyond the exhibition, what other residency activities this year have provided cultural impact in terms of diversity and cultural wealth in the communities served by the College?

RC: The Center for Equity and Cultural Wealth has been the mastermind behind the College’s plan for inclusion, broadly speaking. In planning the residency, we have tried to accommodate their vision for BHCC. We fully expect that the cultural wealth of the inaugural BHCC residency will have a major impact, culturally and socially, on not only the College community, but the City of Boston as well, and beyond.

PE: What do you see as the future of the residency for BHCC and its mission for faculty, staff and students?

RC: The future of BHCC is brighter than ever. Learning leaders are being cultivated here. I’m a big fan of the Nelson Mandela playbook. He practiced the attitude that everybody should feel bigger in your presence, that you bottle the dream for future generations, and that you can turn bitter enemies into allies. My dad’s repeated phrase “keep it clean” also steers my hopes for the residency’s future. He was my first mentor as both an intellectual and an artist, and he fostered in me the notion that you can be successful while still being a moral person.