The Chinese first came to Boston in late 19th century when Chinese laborers migrated east, away from racial persecution in the West after the completion of the transcontinental railroads. The people settled in a residual area in the city when many of the better offs were moving to the outskirts. For decades, due to racial discrimination, the Chinese were restricted in their livelihoods mostly only to running laundries and restaurants. To avoid competition with each other, the shops often had to be located in distant and isolated towns all over New England. For them, Boston’s Chinatown served, once every few months, as a refuge and a connection to “home”. It became, through most of the 20th century, the economic and social fulcrum for the Chinese of the region, and, later, as other immigrants arrived, for most Asians.

In the late 1960s the major threats to the community started when the City claimed blocks for highway construction. In the 1980s, in the name of urban renewal, the City zoned large residential areas for demolition to be replaced by commercial and institutional developments. The community fought back, and arrested some of the plans and diverted the land to the construction of mixed-rent housing for long-time residents.

In recent times, a new threat arises as a new professional class, desiring to live closer to work and play, started moving back into the city.Both property values and rents increased sharply, with the consequent heavy pressure on disposing neighborhood housing in favor of high-cost, high-rise luxury coop buildings. This poses further danger for Chinatown to be able to stay as a viable place for long-time residents and businesses, and continue as the locus of the area’s Asian population.

This project is to emphasize to the community and the public at large the importance of maintaining a home for the Asian Americans in the Northeast. The portraits of the 12 figures and groups were selected from the archives of Chinese Historical Society of New England (CHSNE). They show the continuing presence of people in Chinatown during the past 125 years.

This project became available with assistance provided by Jasmine Lee, (Captions) Prof. Wing-Kai To, Bridgewater State University A New England Foundation for the Arts (NEFA) Creative City Project and in partnership with CHSNE. 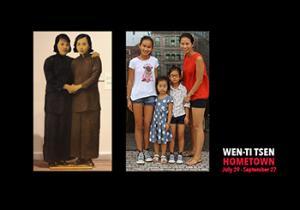 Wen-ti Tsen is a painter and public artist. He was born in China, grew up in Europe, before coming to the U.S. to study painting at the School of the Museum of Fine Arts, Boston. Since the mid-1970s, after living and traveling for several years in different countries, he has been engaged in making art that explores cultural connections: with personal paintings and installations, large-scale public art sculptures and working with communities to express social issues in various art forms.

Re-presenting Boston Chinatown as a Place of People was setup as an art project in the streets and public spaces of Boston Chinatown to draw attention to the gentrification and other developments of the last 40 years that continually threaten the historical nature of Chinatown.

The second part of this project was in collecting sets of photo portraits of current people “residents, workers and visitors” posing in front of a backdrop of Harrison Avenue, Chinatown as reproduced from an actual printed postcard of the same location, circa 1910s postcard.